f0rsakeN’s younger brother, named Jojo managed to steal the public spotlight when he played with his brother’s account with Jinggg at the Radiant level.

However, that doesn’t seem to be a problem for ForsakeN’s younger brother, Jojo, as he plays so well with his brother’s deadly duet. 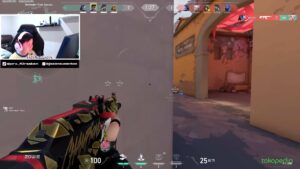 Not surprisingly, with his expertise in playing FPS games like his older brothers, Jojo will most likely follow in the footsteps of the legendary Xccurate and also f0rsakeN.

Even though he is 10 years old, Jojo seems comfortable playing with his brother’s various gaming gear. Initially, he only intended to play one round to replace Jason.

Jojo plays with Agent Fade, he even knows how to properly use utility agents such as the Prowler, to Haunt.

The way Jojo moves, tap-tap with weapons is really something that other 10 year olds in general can’t do.

Winning the pistol round, Jojo received praise from Jinggg who then invited Jojo to join Paper Rex.

“Wow, Jojo you are so cool! Do you want to join Paper Rex or not? I left the team for you,” said Jinggg.

Jojo was then comfortable and continued to play with Jinggg. He even won the match at the Radiant level.

It’s beyond reason, how a 10-year-old child can follow in his older brother’s footsteps as a pro FPS player in the future.

This invited congratulatory messages from f0rsakeN fans, showing that his little brother could become a potential Valorant pro player.

READ ALSO: The latest Valorant update brings big changes at the end of 2022